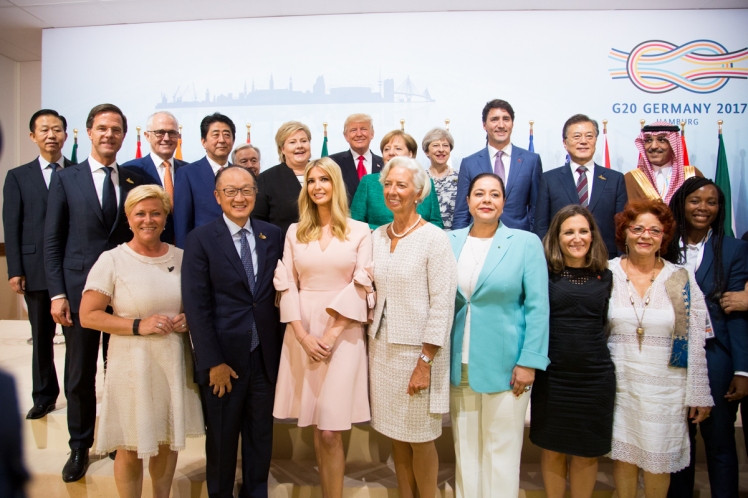 In our era of post-truth politics and fake news, when official statements are filled with either falsehoods or platitudes, there’s still one place we can find the truth laid bare: the body.

On July 7 and 8, world leaders gathered in Hamburg, Germany for the G20 Summit, putting themselves on display for the world to analyze, scrutinize and ridicule. German Chancellor Angela Merkel was caught on camera rolling her eyes at Russian President Vladimir Putin’s “mansplaining.” French President Emmanuel Macron was seen cutting through the crowds “like a shark” to stand beside President Trump in the front row for the photo shoot. A day before, the wife of the Polish Prime Minister seemed to bypass Trump’s outstretched hand to shake Melania’s instead.

Body language has long been a medium for examining interactions between heads of state, especially in the age of social media. It’s international relations personified—the billiard ball model of international affairs, but instead of states, the bodies of world leaders collide in the form of handshakes, arm yanks, and shoulder grabs.

In 2009, President Obama was criticized for bowing to the Japanese emperor. He was also guilty of a cringe-worthy handshake with Cuban President Raul Castro, when Obama’s hand fell limp from the wrist like a dead fish. Even Canada’s debonair President Justin Trudeau botched a three-way handshake with Obama and Mexican President Peña Nieto.

But today, the presidential body seems more important than ever. For one thing, Trump himself draws attention to it, whether he’s denying the stubbiness of his fingers or showing us his hair is real. But more importantly, Trump’s physical personhood matters because unlike his words, his body is sincere.

His world-famous handshakes tell us more about the man than a White House press statement ever could, revealing an air of self-importance and a quest for physical domination. His crushing handclasp made Japanese Prime Minister Shinzo Abe grimace, and his signature handshake-yank nearly brought Supreme Court Justice Neil Gorsuch to the ground. And with the sulky expression of a child, he refused to take Merkel’s hand at all.

In meetings with foreign leaders, Trump struts, thrusts and puffs his chest. At the NATO Summit in May, the president bulldozed his way through the crowd, pushing past Montenegro’s Prime Minister Dusko Markovic before straightening his jacket, nose in the air: victorious.

Who are Trump’s contenders in this carnal race for masculine dominance? Why, young male leaders eager to assert their own virility, of course. In May, Macron and Trump locked hands in a white-knuckled death grip: “A moment of truth,” Macron called it, a sign the French President “would not make small concessions, not even symbolic ones.” Trudeau’s strategy was to beat Trump to the punch, grabbing his shoulder to avoid getting yanked.

Where words obscure and evade, expressions and postures expose what we think and feel. With a world leader refuting basic facts and uttering countless lies, it’s no wonder we fixate on the body. Every photo-op, every awkward interaction could be the next big reveal on the international stage—or, at least, the next GIF gone viral.

Most of America feels the same, Melania pic.twitter.com/Ibde9GWm5u

Since the G20 summit, news outlets including the BBC and Time have called on body language experts to shed light on the long-awaited Putin-Trump handshake—to confirm or counter the accusations and scandals, to finally tell us the “truth” about Russian influence in the U.S. election. When we tweet and scrutinize three-second videos of our world leaders, we thirst for cues and clues, hoping to gain insight from a furtive glance or a twiddling thumb. Because while we cannot trust what Trump says, we can believe wholeheartedly in his gestures.

3 thoughts on “World Leaders May Lie, but Their Body Language Tells All”