The recent chemical attack in Syria and subsequent U.S. airstrikes have brought the country’s civil war back into front-page headlines.

Yet many of the stories on Syria revolve around overwhelming statistics and foreign intervention rather than the nation and its citizens. As it’s commonly depicted in the news, Syria is a site of great power posturing and bombing—of proxy wars, terrorism and geopolitical instability. In attention-grabbing captions and Western-centric narratives, the Syrian people are little more than victims, bargaining chips or national security threats.

Here’s a list of five books on the Syrian Civil War that will take you deeper into the nation that politicians and journalist tend to paint in broad strokes. All these works, written by women from Syria and around the world, share a focus on the intimate, revealing stories of individuals often hidden beneath headlines of airstrikes and cities under siege.

1. “The Home That Was Our Country: A Memoir of Syria” by Alia Malek

Journalist and civil rights lawyer Alia Malek was born in the U.S. to Syrian parents, but when the Arab Spring began in 2011, she returned to her grandmother’s home in Damascus, where she spent the first two years of the civil war getting to know Syria—and her neighbors.

In “The Home That Was Our Country,” Malek invites readers into her family’s apartment building to hear stories of family members, friends and neighbors. Beginning with her grandfather who was born under Ottoman rule, Malek’s work blends personal family narratives with over 100 years of Syrian history. Covering French colonization, the rise of the al-Assad family and the enduring civil war, Malek’s work sheds light on both the Syrian people and their nation’s politics.

2. “The Morning They Came For Us: Dispatches From Syria” by Janine di Giovanni

Janine di Giovanni’s work explores the lives of ordinary Syrians in anything but ordinary times: Nada, a student activist who was captured and brutally tortured; an infant who died of a respiratory infection because there was no ambulance; the wealthy elite laughing at pool parties amid sounds of shelling in the distance.

An award-winning reporter who has covered wars in Palestine, Bosnia and Chechnya, di Giovanni has produced a sorrowful work that blends the personal and the political with candor and anguish.

3. “The Crossing: My Journey into the Shattered Heart of Syria” by Samar Yazbek

In 2011, Samar Yazbek, a well-known novelist and outspoken political dissident, fled to Paris after receiving a clear warning from the Assad regime: she was taken to a torture chamber to witness what would happen to her if she continued to speak up.

A year later, while families were escaping war in Syria, Yazbek crawled through an opening in the fence at the Turkish border and crossed back into her country. Escorted by two rebel guides, she traveled across Syria documenting stories of soldiers, shopkeepers, families and children. The result, “The Crossing,” is both a historical testament to life in Syria and a personal story of an exile’s return to a devastated homeland.

4. “My House in Damascus: An Inside View of the Syrian Crisis” by Diana Darke

In 2005, British travel writer and Middle East expert Diana Darke bought a house in the Old City of Damascus. Over the next three years, Darke restored the Ottoman-era home that would later become a sanctuary for friends and refugees during the war.

In “My House in Damascus,” Darke, who is fluent in Arabic, draws on her personal experiences and regional expertise to describe life before and during the conflict. By comparing Syria with Egypt, Tunisia and Libya, Darke illuminates the complex relationship between the Assad regime and the Syrian people, providing insight into the nation’s political unrest and civil war.

5. “Syrian Dust: Reporting from the Heart of the War” by Francesca Borri (Translated into English by Anne Milano Appel) 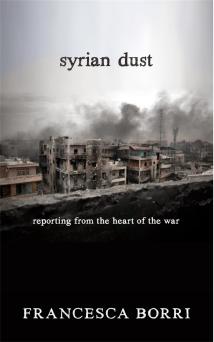 In “Syrian Dust,” Italian journalist Francesca Borri invites readers to join her on the frontlines of the Battle of Aleppo, where she recounts stories of siege, bombardment and bloodshed in a city that once housed over 2 million people.

But Borri does not just report on the city’s terrifying events; “Syrian Dust” is also an exploration of the grim nature of war reporting itself. Dodging bullets alongside soldiers, hiding from shelling among women and children, and experiencing the callous competition between Western journalists hungry for war stories, Borri lays bare the personal struggles of a freelance journalist covering the war in Syria.