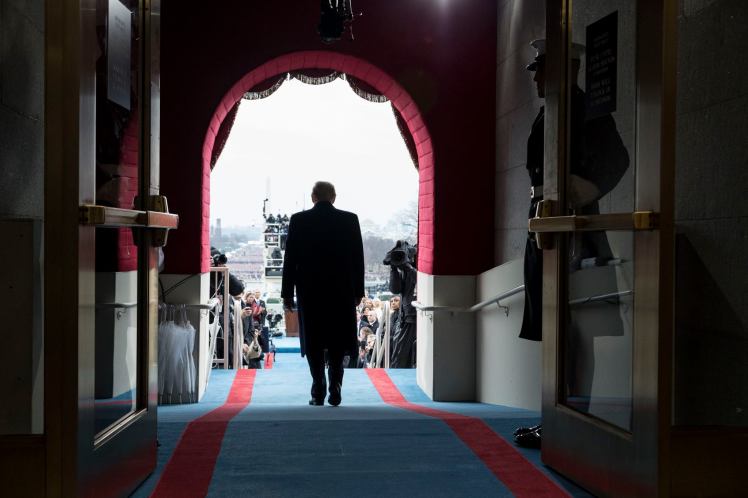 April 29 marked 100 days of Trump’s presidency, a benchmark he once called “ridiculous” and “not very meaningful” for measuring success.

But as he approached his first 100 days in office, the President called his “just about the most successful” in American history. He insisted on his achievements in an op-ed and put up a new government webpage claiming he’s done more during this period “than any other president in over half a century.”

Trump’s vacillating rhetoric and anxious assertiveness isn’t limited to talking about his 100 days; they also characterize 100 days of his foreign policy. From outright policy reversals to bombastic statements aimed at allies and enemies alike, Trump is fomenting global instability and weakening America’s standing the world.

In 2016, Trump said his “number one priority” was to dismantle the Iran deal. Today, the multilateral agreement is still alive, well and apparently working, as Secretary of State Tillerson recently noted in a letter to Congress. China, once the “grand champion” of currency manipulation, is manipulator no longer. Formerly “obsolete” NATO may serve a purpose after all.

Dealing with the complexities of international affairs requires some flexibility. But Trump is doing more than demonstrating the nation’s capacity to roll with the punches. His diplomatic U-turns are fast and sharp, and they’re taking the world on a nerve-wracking and disorientating ride.

Just last month, the Trump administration revealed its intention to pull out of NAFTA—“the worst trade deal ever”—provoking alarm in Mexico and Canada. The peso plunged, the Canadian dollar fell slightly, and Canada’s Prime Minister Justin Trudeau made two calls to the White House. Then Trump switched gears: they would renegotiate the deal, not scrap it.

These underhanded negotiating techniques may be suitable for business deals, but they are not judicious in foreign affairs. Nervous allies and unstable financial markets will not benefit the U.S. Nor will its new image as a fake: “It seems like he’s sitting at a poker table bluffing rather than making serious decisions,” said one Mexican legislator.

The President’s erratic behavior will do more than worry his neighbors or weaken his position at the negotiating table. Mixed signals on the international stage may also mislead adversaries, or encourage them to test Trump’s resolve. In fact, such confusion may have emboldened Assad to use chemical weapons last month. After Assad’s chemical attacks in 2013, Obama failed to make the threat of force credible by not retaliating once his “red line” was crossed. But by emphasizing his staunch opposition to intervening in Syria, Trump may have sent the dictator a different message: there are no red lines here.

The administration has depicted Trump’s turnaround in Syria as an emotional “change of heart,” but his current Syria policy—if it can be called such—remains a contradiction. Though he has hit back against the “barbaric attack” on Syria’s “beautiful babies,” he maintains his policy of keeping those babies out of the U.S. through his proposal to ban Syrian refugees.

Worst of all, Trump doesn’t give these decisions or his policy reversals the seriousness they deserve. When asked about the airstrikes in Syria, Trump offered a reporter a smug account of what it was like to tell President Xi about them over “the most beautiful piece of chocolate cake that you have ever seen.” Meanwhile, Trump’s provocative tweets on North Korea are raising tensions across the region and the world, alarming many concerned about what one North Korean official called “a dangerous situation in which a thermonuclear war may break out at any moment.”

A Madman by Design?

Some have praised Trump’s flip-flopping as strategic unpredictability, with one Fox News commentator comparing the President to a high school bully with a terrible temper: “I want the bad guys to think that he could do anything to them at any moment.” There’s reason to believe Trump’s madman persona was crafted by design: “We have to be unpredictable,” Trump said in his speech on foreign policy last year.

If there’s one thing we can predict about Trump, it’s that he will continue to act on impulse and rule by caprice. His restless foreign policy has shown him to be a fickle-hearted friend and an erratic foe: the global boy who cried wolf. And such a reputation will do more harm than good. It will make it difficult for allies to feel safe and easy for enemies to call Trump’s bluff. After all, Nixon’s madman strategy—designed to convince North Vietnam of the President’s volatility in order to negotiate an end to the Vietnam War—didn’t actually work.

A lot can happen over the next three years and nine months. But if the last 100 days are any indication, we can expect more outbursts and about-faces from Trump than we’ve seen from presidents before. Then again, who’s counting?